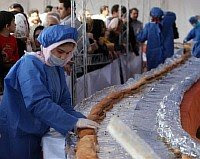 Iran failed on Friday to register what it said would be the world's largest sandwich in the Guinness book of World Records after people rushed forward and began eating it -- before it was measured.

Event organizers had planned to stuff the 1,500-meter-long sandwich with 700 kg of ostrich meat and 700 kg of chicken, and display it in a park in the capital Tehran.

But as the sandwich was being measured, chaos ensued. The giant snack was gone in minutes, a Reuters witness said, leaving the three Guinness representatives present with a dilemma.

One of the event's organizers said video footage of the sandwich would be sent to Guinness officials.

"We still think the sandwich will be recorded in the Guinness book because of all the evidence and footage that we will send them," Parvin Shariati said.
Posted by Joygopal Podder at 7:44 PM